The Base, Path and Fruit of Dzogchen
With SMS Instructor Elias Capriles
November 20 to 22, 2020 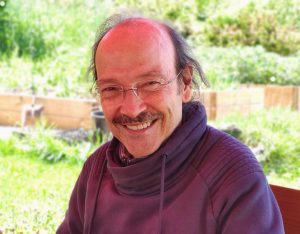 Each and every Buddhist Vehicle must have the above three elements. However, in Dzogchen they are basically the same: The Base is Buddhahood in act (i.e., fully actual Buddhahood, rather than a potency that, like a seed, must develop into Buddhahood)—even though temporary obstructions forestall beings in samsara from perceiving it: it is like the sun that may be covered by clouds. The Path is the recurrent unconcealment of the Base. And we speak of the Fruit when the potentialities for temporary obstructions to conceal our primordial Buddhahood have been fully neutralized / burned out.
Each of those three—the Base, the Path and the Fruit—possesses the three kayas of Buddhahood, as each of them is Buddhahood in act. In the Base, these kayas are called essence (ngowo), which is emptiness; nature (rangzhin), which is clarity, luminosity or reflectiveness; and energy, which is magagpa: an unobstructed (magagpa) capacity to manifest that gives rise to uninterrupted (magagpa) manifestation.

Only Dzogchen explains these three forms of manifestation of energy, because only Dzogchen uses them as the foundation of its particular Path, and only Dzogchen involves Fruits based on rölpa energy.

Finally, all Buddhist vehicles agree that nirvana is asaṃskṛta (nonfabricated, uncompounded, unproduced, uncontrived, unconditioned, uninduced, uncreated). However, with the exception of Dzogchen, all are based on methods that involve fabrication, conditioning, production, creation, etc. This is why the Dzogchen teachings emphasize that only Dzogchen has a method that is in full agreement with the principles of Awakening: hence its character as a “Direct Path”.

You can make a donation at Infopoint or at the Gönpa for live attendance.

Elias spent 10 years in South Asia where he met his first Dzogchen teachers and did many 3-month retreats focused mainly on Trekchöd. He received teachings on Trekchöd from Trinley Norbu Rinpoche and Dudjom Rinpoche, and the main cycles of Nyingma empowerments from the other Great Masters of the 1970s. It was also at that time that he met Chögyal Namkhai Norbu, his last great Dzogchen teacher. Currently he is an instructor of Buddhism and Dzogchen certified by Dzogchen Master Namkhai Norbu Rinpoche. He lectures, leads workshops and teaches courses in many countries of the Americas, Europe and Asia.